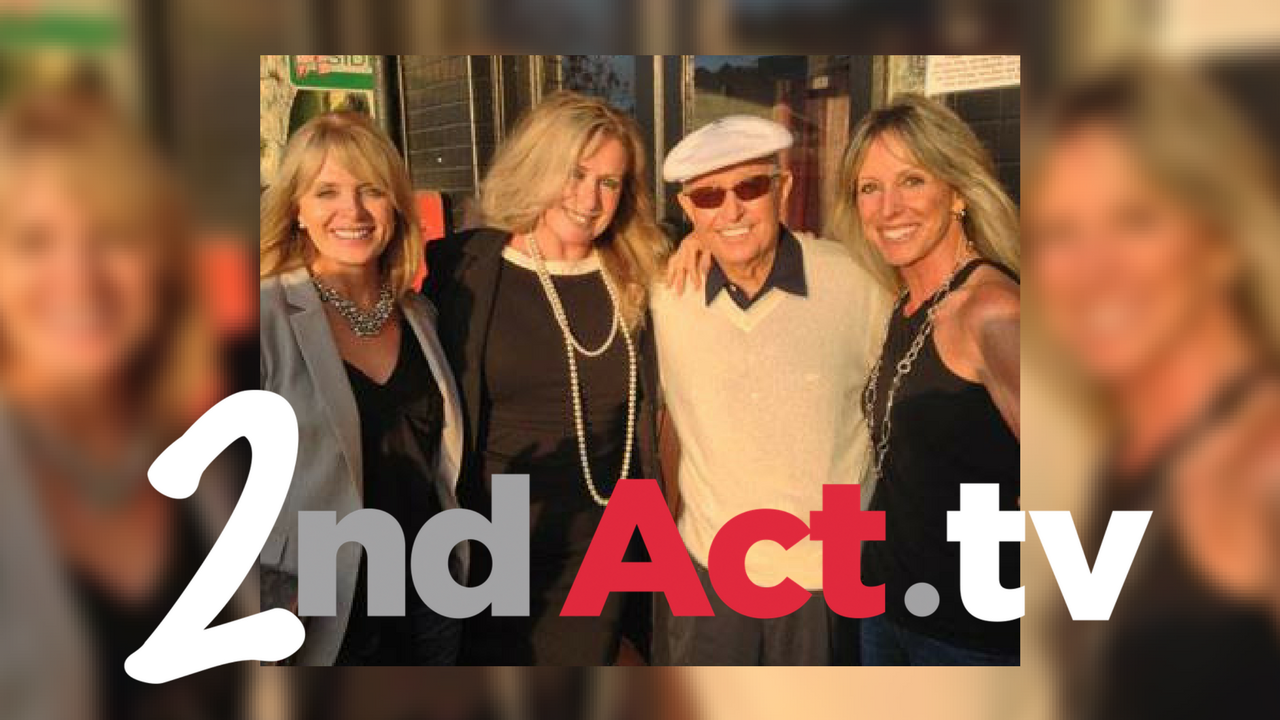 Here we are pitching Our 2nd Act pilot at Real Screen West 2013! Debbie, Tracey and yours truly pictured with legendary Bob Toski who was also in attendance to shop a reality-based golf show.  At 88, Bob is a perfect example of living life to the fullest in his second act.

The adventure started nine months ago.  Two of my best friends (and cast members Debbie and Tracey) accompanied me to pitch “Our 2nd Act” – a reality-based talk show – at the annual Real Screen West conference in Santa Monica, an industry event hyped as “the West Coast’s most important and valuable unscripted entertainment conference.” With sizzle reel, one-sheet, production bible, pitch coach, (and the minds of naive teenagers who don’t know what they don’t know) we set out to woo the industry’s most influential program acquisition executives.

I still smile (and shudder) at the spectacle.  Never in a million years did I envision us cast in this scene.  At the average age of fifty-five, three chicks from the 70’s, clad with Charlie’s angels locks and a dire dose of nervous energy, parading in front of an influential group of network execs (predominantly male), touting the appeal of a show featuring menopausal friends from high school in the midst of starting over and rediscovering life after fifty. All in an on-line world of cyber dating, erectile dysfunction, hot flashes, vaginal dryness, and other such endearing conditions.  (We killed it with: “Whatever happened to the hair down there?”)

Once the jaws were back in place, we actually received a lot of encouraging feedback and “atta girl” pats for having the gumption to “put it all out there” and tackle the intimate issues of our generation in a real and entertaining manner. After all, most of the execs were of our vintage (or on the express train headed south) and got it!  What we didn’t get were any “green lights” – the industry term for buying a show. Why?  Because the networks, (we were told), are not investing in programming targeted to our demographic.  Bottom line, with dwindling budgets and marching orders to discover the next “Duck Dynasty” the networks have labeled our age group “irrelevant” to advertisers.  Really?

While we were warned by people-in-the-know to anticipate this objection, it was another to hear it straight from the horse’s mouth. The most shocking being the director of development for OWN – a woman in her late fifties.  “OWN is looking to skew younger,” she stated with conviction.  Seriously Oprah?  In the world of economics, Baby Boomers are dubbed the “most valuable generation” and projected to soon claim over 50 percent of the US population, with control over a staggering 70 percent of disposable income.  We are fiscally irrelevant?

I’m all for constructive criticism.  Really! Tell me our idea stinks, our presentation sucked, our sizzle reel fizzled, whatever … God knows I’ve learned to handle rejection. Don’t tell me we’re too old!

Fast-forward one year. Like the old saying goes: “If the mountain won’t come to Muhammad, …” We have to take action to make things happen.  And that’s how 2nd Act TV was launched. Reformatted from a 30-minute reality genre, to a talk-driven series of 5-minute episodes, 2nd Act TV – Digital TV for Baby Boomers – debunks taboo topics associated with aging, and – with an eye towards humor – provides a platform for living with purpose and taking charge of our physical, emotional and sexual health.

Become involved!  Let’s show “them” just how relevant we really are!

© 2023 2ndAct TV, All Rights Reserved
Website Built and Managed by  CREATOR SITES PRO
Want to be a Guest on 2nd Act TV?